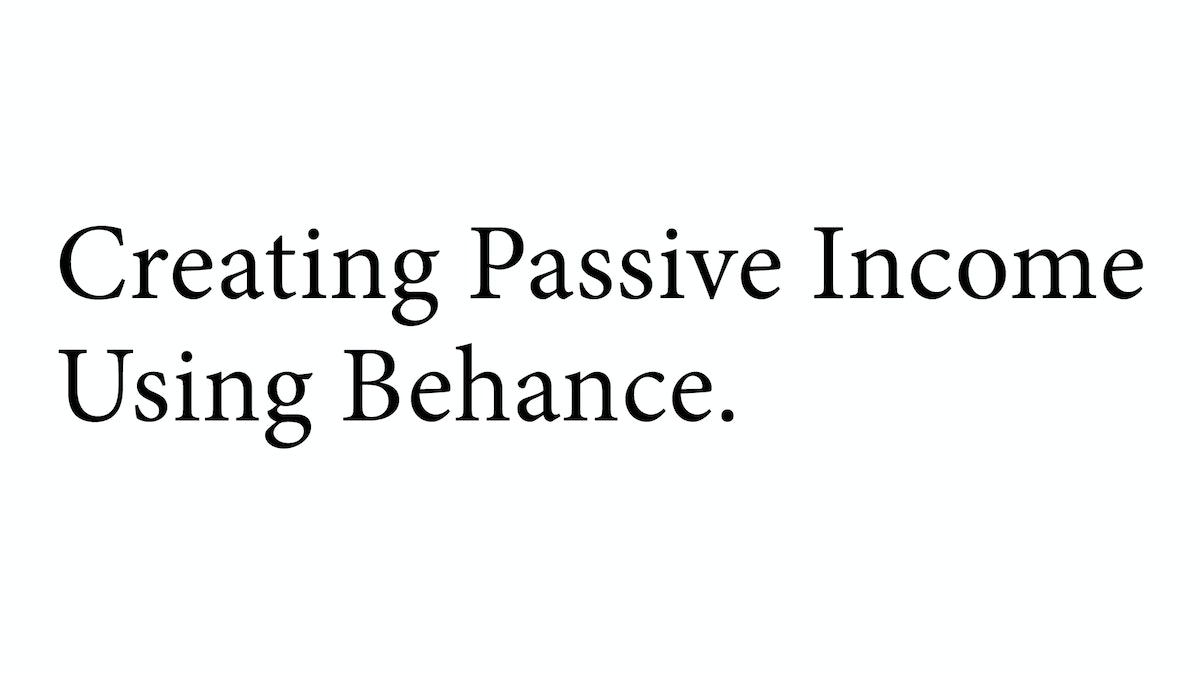 If you’re anything like me, you couldn’t help but get a little excited the first time you read the ‘4 Hour Work Week’ or ‘Rich Dad Poor Dad’. Being told by someone who’s made it that it’s possible to be successful without being nailed to a desk from 9–9 every day is quite a revelation.

The next step however, is rather more demoralising. You start looking for ideas..... maybe I'll start a podcast and sell advertising? Maybe I'll write a book? Or build some software and set up a worldwide commerce store?

What these books fail to say however, is that it requires a tonne of work to get any ‘passive’ project to a point where you can generate consistent income. And most of the time they still require more than 4 hours a week to maintain.

I’m not afraid of a bit of hard graft, but I wanted to test the theory quickly so I turned to the platform I’d had minor success on before, Behance.

For those that are not aware of Behance, It’s the world largest creative network. It was aquired by Adobe for a reported $150 million, a steal in my opinion.

Despite having not updated my profile since Uni, I had created a typeface called Suave based on the 1920's Art Deco era. That, despite not being a usable type, had proven to be popular. For a while I had it as a free Vector download, until I realised Paris Hilton had used it for her horrendous album cover.

Anyway… I thought, well if it’s good enough for Paris Hilton, surely people won’t mind paying a £10 to use it. I thought I’d be lucky to make a few sales a year but I decided to give it a go anyway. I sent the Vector type to a Ilya Yakovlev a really decent freelancer on the then ODesk (now Upwork). He charged me £100 to covert it into a usable type.

If anyone reaches out to Ilya, which I recommend. Be sure to tell him Ricky Richards sent you. I’m not getting any commission, I’d just like him to know I appreciate his work.

From there I used Gumroad because it has a brilliant 2 step purchase system and automatic file delivery. I embedded the for sale info into the project images and the whole process took no more than a day from sending the type to having it for sale on Behance.

Then, something special happened. One day after it went live, I received a sale! And I developed an uncontrollable condition known as The Passive Income Dance. This is the very reserved, middle of coffee shop version…

Since that day I’ve continued to make sales, I made my money back in just over a month and have since gone on to make 35 sales in the last three months.

Not game changing by any means, but actually passive. The real value is not the £10, it’s the smile you get every time you wake up to a £10 sale instead of an annoying client email. As the saying goes, ‘every little helps.’

I’m going to need a few hundred more typefaces bef0re I could ever claim to be financially free. But non-the less, I’ve made a good start, and one I’m sure many more people could replicate.

Overall, Behance has a very viral discovery system, and the gap between popular and unpopular projects is vast. I wouldn’t count on it as a sole source of income, but if you are one of the top dogs on the network, or you happen to have a popular project on there, I’d recommend working out a way to cash in on that traffic.

What do you think? Would love to hear your thoughts! And please click the recommend button below if you liked it. ☺ If you’d like to receive updates on other content I publish, please visit my site rickyrichards.com or Follow me @MrRickyRichards